Tiamat (goddess)
Tiamat is a personiﬁcation of the primordial sea from which the gods were ﬁrst created. She is also the main adversary of Marduk in the Enūma Eliš.

Functions
Tiamat’s exact functions as a goddess are difﬁcult to establish. As her name indicates she was a deiﬁcation of the primordial sea. Our best source of information for Tiamat is the myth Enūma Eliš, and in fact, there are only a handful of references to her outside of it. Enūma Eliš begins with a description of the two primeval seas, the salt sea Tiamat and the sweet sea Abzu, mingling their waters together to create the gods. In the following battle between Abzu and Ea, Tiamat attempts to appease Abzu and stop the conﬂict. But when she is later pressured by the lower gods to revenge him, she herself becomes the main antagonist of the story, creating an army of monsters led by her new consort, Qingu. She is ultimately defeated by Marduk, who incapacitates her with his “Evil Wind” and then kills her with an arrow. Marduk splits her in two, creating heaven and earth from her body, the Tigris and Euphrates from her eyes, mist from her spittle, mountains from her breasts and so on. Throughout the epic, there are differing descriptions of Tiamat: she appears both as a body of water, as a human ﬁgure, and as having a tail. These varying descriptions are ultimately reconciled as Marduk turns her limbs into geographical features.

Divine Genealogy and Syncretisms
In Enūma Eliš, Tiamat is the mother of all the gods. Together with Abzu she creates Lahmu and Lahamu, who in turn beget Anšar and Kišar. Though one cannot point to a syncretism as such, there are several models for Tiamat in the earlier mythology. Katz argues that the ﬁgure of Tiamat unites two strands of tradition attached to the sea. The ﬁrst is the motherly ﬁgure of Namma, who is also referred to as a primeval ocean from which the gods were created. The other is the ﬁgure of the sea as a monstrous adversary, like the Levantine god Yamm. Another important inﬂuence for the ﬁgure of Tiamat is Anzu, a mythical bird defeated by Ninurta, indeed the battle between Marduk and Tiamat has a number of parallels to the battle between Ninurta and Anzu.

Cult Place(s)
There was no cult dedicated directly to Tiamat, but the battle between Tiamat and Marduk played an important role in the New Year’s festival in Babylon. The Enūma Eliš was recited on its fourth day, and some argue that the festival included a symbolic reenactment of the mythological battle.

Time Periods Attested
The oldest attestation of Tiamat is an Old Akkadian incantation, though there are few other references to her until the ﬁrst millenium BCE. After the composition of the Enūma Eliš, Tiamat is found in a number of theological commentary works, but most of these seem to rely on the epic.

Name and Spellings
The name Tiamat is uncontracted form of the word tâmtu, meaning “sea”. The long vowel â is contracted from the short vowels i and a. The word is in the “absolute state,” a noun form that is equivalent to the vocative (a grammatical case which directly invokes or addresses a person or deity; literally the name means “O, sea!”).
/ The AMGG project / Ancient Mesopotamian Gods and Goddesses /

Igigi/Igigu (a group of gods)
This Semitic term describes a group of possibly seven or eight gods. It is likely that the god Marduk was one of them, but the total membership in this group is unclear and likely changed over time.

In the prologue to the famous Code of Hammurabi it is indicated that the Anunnaki elevated the god Marduk among the Igigu gods but it is difficult to assess the significance of this passage.
Some mythological texts, such as the Anzu myth, speak of an assembly of the Igigu gods, but whether this might be an institutionalized assembly remains doubtful.

The term Igigu is first attested in texts from the Old Babylonian period and only occurs in Akkadian contexts. A Sumerian logographic equivalent of the term Igigu is nun-gal-e-ne, to be translated as “the great princes/sovereigns.”

Gamayun(Гамаюн)
In literary sources of 17th – 19th centuries, Gamayun was described as a bird that occasionally flies from heaven to earthly skies, has no legs and no wings, and hovers only with the help of her gorgeous long tail. Later on, her image underwent a certain change and was depicted having legs, wings and also a woman’s face.
To some people, like Russian artist Viktor Vasnetsov and poet Alexander Block, Gamayun was closely connected with the ideas of blissfulness and happiness. But she was often perceived as a bad sign. This bird almost never descends to the ground and if she does fall, death will soon come to a member of a royal family. This is why Gamayun has also earned a reputation of a bird of sorrow. It is likely that this creature came to slavic culture from Iran. Their mythology has legends about a bird “huma”, who brings power to those over whose head she passes.

Aurorazhdarcho
was a pterosaur, a type of flying reptile. Aurorazhdarcho lived during the Late Jurassic and resided in Europe. 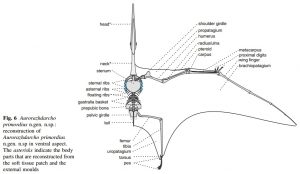 Berimbau
Brazilian musical bow, made of wood. Most instruments are just under 5 feet (1.5 metres) long, and they are strung with a single metal wire, called an arame, that is typically drawn from an old truck or automobile tire. A dried, hollowed, open-backed gourd resonator—called a cabaça—is attached to the instrument near its lower end; the resonator is held in place by a loop of string that passes through the top of the gourd and around both the wood and the wire of the bow.
When it is played, the berimbau is held in an upright position—usually in the left hand—with the open back of the gourd against the stomach. The little finger of the supporting hand is slipped under the string that secures the gourd to the bow, while the ring and middle fingers are wrapped around the wooden pole just above the gourd. The index finger and thumb manipulate the dobrão, a thick metal disc or smooth stone that is pressed against the wire to generate different sounds during performance. Held in the other hand are a thin stick, roughly 12 inches (30 cm) long, called a baqueta, and a small rattle, called a caxixí.
Using the baqueta to strike the wire of the berimbau and the dobrão and cabaça to control the instrument’s pitch, timbre, and resonance, the berimbau player generates an array of discrete rhythms known as toques. These toques are built from a combination of three fundamental sounds: a low pitch produced by the open wire; a higher pitch produced by stopping the wire firmly with the dobrão; and a nonpitched buzz, generated by allowing the dobrão to rest lightly against the wire when it is struck. Resonance and timbre are controlled by strategically pulling the gourd toward and away from the stomach. Meanwhile, the rattle underscores the strong beats of each rhythmic pattern. / Britannica / 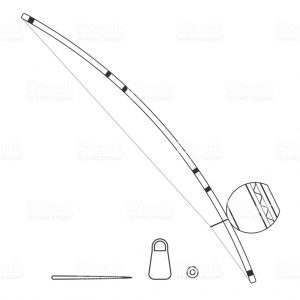 Pensato
In music, a pensato (Italian:”thought”) is composed imaginary note, a written note which is neither played nor heard.
Anton Webern is credited by some with the first use of pensatos, while others argue he did not use them at all.